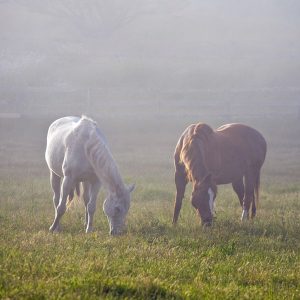 Planning for the Final Goodbye

In an ideal world, horse owners prefer the thought of their aged senior dying a peaceful, natural death. Unfortunately, many owners are faced with the difficult decision of having to put down their beloved equine due to humane or medical reasons. While planning ahead for the inevitable may be somewhat painful, understanding the process and knowing ahead of time who to turn to for help will make the decision easier, especially when our minds are clear and free of emotion.

Throughout the eight years that Bronwynne Wilton owned Pepper, a lively gray pony with a personality, he gave her family all that he had, and more. Saved from a trip to the slaughter house by his previous owner, where she paid the equivalent of meat price for him, Wilton never knew Pepper’s true age, but estimated that he was likely in his teens. Unfortunately, upon closer inspection, his feet were already showing the tell-tale signs of some metabolic issues occurring within the hoof capsule.

“After bringing him home to a friend’s farm, we discovered he was much more nervous around humans than we originally thought, and his feet were quite a mess, as they were long and laminitic,” says Wilton, who is on staff with the Office of Research at the University of Guelph in Ontario. “We worked on his feet gradually and also on his confidence around us, and both improved quite quickly. We kept him off grass, and his feet were quite good for about five years with us, and all three of my children learned how to ride on him. He had a lot of character and was a funny little pony to get along with. There was quite a bit of bonding with him and our family over the years.”

Pepper was loaned out on a free lease to allow another little girl to learn how to ride, and about a year later he came back to the Wiltons and was retired on their farm near Fergus, Ontario while they carefully managed his laminitic condition. One of the most common causes of lameness in horses and ponies, laminitis is a painful inflammatory condition found in the laminae of the hoof. Research has found that it can be triggered by a variety of metabolic or physical causes. Even though the Wiltons monitored his diet by restricting his access to grass completely, soaking his hay and regularly consulting a veterinarian, Pepper’s health continued to deteriorate.

“We tried to keep him as comfortable as possible for months; however, given his age – we figured him to be about 24 years old – and the obvious pain that he was in, we discussed options with the vet,“ says Wilton. “In the end, it just didn’t make sense to prolong his distress any further.”

“The vet was wonderful about affirming their decision and said it was the kindest option given Pepper’s circumstance,” she added. “The actual end, while of course incredibly sad and heart-breaking, was also reassuringly peaceful,” says Wilton. “Pepper spent the last morning of his life being loved and pampered by the people who knew him best. He was fed his favourite treats, which he hadn’t been allowed to have for so long, and everything was very kind and calm.” While it was not an easy decision to make, it was a respectful and humane ending for a pony who gave years of enjoyment to the Wilton family.

Knowing When to Make the Call

The decision to have one’s horse euthanized can be complex and is unique to each individual horse and its owner, advises Laura Frost, BSc., DVM, of Halton Equine Veterinary Services in Puslinch, Ontario. “It is beneficial to explore the options of euthanasia ahead of time,” says Frost. “Many of us, including veterinarians, can be highly emotional while dealing with our horses’ illnesses, and the ability to make decisions can be hampered, especially when one is expected to make a tough decision within a short period of time.”

Euthanasia, the practice of intentionally ending a life in order to relieve pain and suffering, comes from the Greek language meaning “a good death.” In the majority of cases, there are two instances wherein equine euthanasia is considered. The first involves an emergency setting where the horse is seriously ill or injured, such as cases of severe colic, head or spinal trauma of the horse. This requires immediate veterinary attention and involves evaluation and consideration for euthanasia. Many times the decision is made for the owner by the vet, for the sake of the horse. The second situation is a chronic, longer-term problem, whether the horse is suffering due to an age-related ailment or a chronic injury that can affect the quality of its life or the cost of care is prohibitive. And in this case, the end of life decision can be much more difficult, as many prefer to avoid making “the call.”

Euthanasia is a kinder option than letting a horse suffer explains Frost. Removing ourselves from the picture and knowing what is best for the horse helps us all deal with the reality of the situation. “The vet can help with the transition by discussing how the quality of life can be assessed, such as the lack of appetite, severe weight loss, identifying signs of pain, such as bruxism (habitual grinding of teeth), prolonged periods of recumbency (lying down), and chronic wounds that are not healing,” says Frost. The cost to euthanize a horse can vary depending on the veterinarian, farm location, medications that were administered to treat the horse, etc.; however, most average from $175 to $250, barring any complications.

Considering one’s options and having the knowledge provided by your veterinarian beforehand rather than during an emergency-type situation will make it easier in dealing with a death and the grieving process. “The veterinarian can also talk about options such as the location of the euthanasia, and what can be expected during the procedure so that the owner can decide if he or she will be present,” says Frost. “It is also important to know how the body will be looked after (buried, cremated). The time of season may limit certain options such as dealing with frozen ground, and if dealing with extreme heat, you may need to try to time the euthanasia so that pickup by a deadstock removal company can be at the farm promptly, not only because of decomposition of the body, but also to avoid predators.” Disposal options should be considered in advance and carried out according to municipal and/or provincial regulations. Euthanasia is a final decision, notes Frost, and both the before and after should be well thought out. “Horse owners should make themselves aware of the options available beforehand, such as a post-mortem or the return of ashes through special cremation, or they may have some regrets, which will make the grieving period that much more difficult,” she says.

The 2013 Code of Practice for the Care and Handling of Equines recommends the decision to euthanize should be made with careful consideration, and at the same time, not to delay the process for reasons such as the horse owner’s convenience or related costs. The act of leaving a suffering animal to die of natural causes, as what some refer to as “letting nature take its course,” is considered to be unacceptable. The Code is also now being utilized by the OSPCA in assessing potential equine welfare cases.

The Code of Practice for the Care and Handling of Equines can be viewed or downloaded at: http://www.nfacc.ca/codes-of-practice/equine.

A Humane End of Life

While the decision to euthanize one’s horse can be a difficult one, it’s something that most horse owners will have to face at some point and plays an important responsibility in horse ownership. Planning ahead for the inevitable arms you with the correct tools to assist you in deciding with a clearer head. It’s important to remember that “It’s not about you” – it’s about what’s best for your horse.